My thoughts on the book Freudian Slip, by Erica Orloff.

When it comes about books, I have realized that the ones that impress me the most are not the ones I choose, but those that choose me instead. At least, this is exactly what happened with this sweet novel by Erica Orloff, Freudian Slip.

A couple of weeks ago, I had never heard the name of the author, or even wondered what a Freudian slip actually was. I had no idea that this book existed, until I found a copy of the Freudian Slip novel abandoned in the London Tube. “If someone left it there, that probably isn’t a great book”, I thought then.

Nevertheless, I picked up the Freudian Slip book because I liked the cover with the tie, the pair of legs and the gorgeous shoes. I thought it may be something like Sex and the City or such. I was wrong! It is a most unusual romantic comedy in which some of its characters are between life and death. It reminded me of a film I watched a few years ago with Mark Ruffalo and Reese Witherspoon, Just Like Heaven. 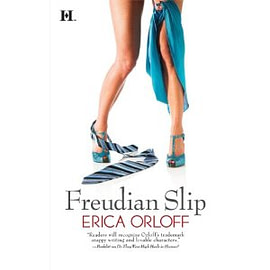 In the meantime, it is time to meet the girl of the story. Our heroine here is Katie Darby, who is going through a rough time in her life: she discovered her boyfriend cheating on her (with her best friend, to make things worse!), and her apartment has been broken into, all on the same day! Soon, she begins feeling some strange voice inside her head. And the weirdest thing is, that voice is giving her hope, good advice, trying to improve her life. I bet you have already guessed that it is Julian’s voice, right?

At first, the two of them don’t quite match. Even so, later, as Julian gets to know Katie, he undergoes into a deep transformation, and the two characters form a strong connection. I know this might sound sappy, but it is actually very well written and the characters, especially Julian, are believable. In some parts of the Freudian Slip, you can FEEL what they are feeling. While I’ve never imagined it when I picked the book in the Underground, I found Freudian Slip to be one of my Top Ten favorite novels of all times!

Doing a little research, I read that Freudian Slip was nominated for 2009’s best contemporary romance by Romantic Times. The author, Erica Orloff, defines herself as a “native New Yorker, novelist, blogger, mother of four, chronic insomniac, alt-rock loving, voracious reader (and prolific writer) who has written over twenty novels across a number of genres and pen names”.

One question though: when you make a Freudian slip what does it really mean?