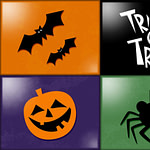 October already, gosh time DOES fly, right? Next thing you know, it’s Halloween once more, then Thanksgiving and Christmas and poof! 2010 will be just another sheet to rip off the calendar. Until some weeks ago, I was pretty certain I would spend this time of the year back in the states, but it so happens I won’t be able to. Halloween or not, I won’t be there to celebrate this year. I feel a bit sad, since I was so looking forward to celebrating a real Halloween. Anyway, I guess there is always next year…

I personally find it so fun to get dressed and to take an active part on the fun! Early every October I would begin choosing home decorations. I try to change them often because if not I get bored, and so do my neighbors, right? I’ve gotten quite creative for the past few years! Not just cobwebs and Jack O’ Lanterns but some really fun stuff, like turning the front porch into a cave with paintings and all… And that evening I always wait for the children to show up, I enjoy looking at their faces in disguise and giving them sweets. Of course, there are some kids that give the rest of them a bad name by being silly and annoying people too much, but I think we shouldn’t let that ruin the fun!

Here in Australia, my house would look odd in Halloween decorations, but I still enjoy lightning some pumpkin scented candles… Here they celebrate Guy Fawkes Eve as the day for Halloween – also known as Mischief Night or Danger Night-. Of course it is not as wide celebrated as it is in America. Most Australian children will just celebrate Halloween as a dance in their schools, but it is far from being the costume parade, the “trick-or-treat” and the day to create lawless or other mischief as it is in the States.

I may admit though, that these last few years I’ve noticed some changes. You see, I’ve been living in Australia for the past 15 years, and for what I can tell, Halloween is becoming a growing trend, thanks to movies and globalization in general I suppose. Every year, more Halloween parties are held, even some companies organize Halloween-themed gatherings for staff and clients, and some parents encourage their children to dress up and go “trick-or-treating”… TV also airs horror movies for those who stay at home… And yet, all of this sounds like good news for Australian costume shops, online stores, and other places that sell or rent Halloween-themed items, but it’s just not the same after you have lived a real Halloween in America.

So that’s it. I can’t help feeling a little Halloween homesick these days. I guess I’ll watch some movies and see if I can take part in some local celebration. What about you? Do you celebrate Halloween back home? What is your favourite thing about this holiday?