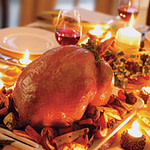 This November I got to fly to USA, and I’m happier than usual, since I’m spending my first Thanksgiving! Most of us, even if we are from other countries than USA, are familiarized with the concept since we have seen this holiday many, many times in movies, sitcoms, soap operas and advertising. However, it is different actually being here to celebrate it and I’m really excited about it, so I want to tell you about this holiday.

Some general facts for the “Thanksgiving dummies” like me: Thanksgiving is always on the 4th Thursday, celebrating the pilgrims coming to America. That’s why it’s an American only celebration, as it’s not celebrated in Australia or in France as far as I know. It is celebrated in Canada too, in fact, Americans and Canadian are disputing the origins of Thanksgiving. For 400 years it was celebrated on different days. American president Roosevelt set the date of the 4th Friday in 1941, and they have been celebrating on that date since.

In this holiday, families get together for an early Thanksgiving dinner, and they also sit down to reflect on what they are thankful for. This is a reminder of the first Thanksgiving, in which the pilgrims of Plymouth Colony got together to celebrate surviving their first winter in New England. The first Thanksgiving feast is said to last three whole days, providing enough food for 53 pilgrims and 90 Native Americans. They eat fish and shellfish, wild fowl such as ducks, geese and turkey, berries and fruit, vegetables such as pumpkin and wild onion, and harvest grains.

Today Thanksgiving has a typical food which is turkey, and it is so popular that some people call Thanksgiving Turkey Day. It is usually served stuffed with a bread-based stuffing and then roasted. However, some people fry the turkey, and every year, there are several reported burns because of the special fryers and the hot oil. Taking a long nap seems to be part of the tradition too: apparently, there is a mysterious ingredient in the turkey (called tryptophan)that makes people feel sleepy.

Watching sports is also part of the Thanksgiving tradition. Most people watch the football game that day, and it is almost as popular as the superball. Out of 32 teams in NFL, only 3 get to play. They are referred to as the Thanksgiving classic.

The day after Thanksgiving is called Black Friday, and it is when all the Christmas shopping begins. Stores are packed because it is the best sale of the year, in fact, it is called Black Friday because even those whose sales are in red have the chance to recover (therefore, go back to “black”). But now we can also shop online, because stores offer the same incredible discounts.

This year, I’m going to celebrate my first Thanksgiving with the family of one of my friends. I hope I get to live what I’ve always believed to be one of the best family holidays! And on Friday I’ll try to walk a lot, in order to burn down some of the extra calories I know I’ll be having…