Teenagers Clutter Management Should Be Taught at School! 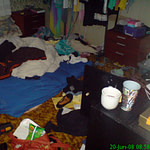 I am trying to teach my daughter about clutter management but I think I may as well give up now.

About 3 or 4 months ago, I agreed on taking on my daughterâ€™s friendsÂ  as she was having issues with her mother and was apparently kicked out of her homeâ€¦Â  She was only 14 and I thought it would be a very temporary solution, a few weeks at mostâ€¦Â  and it felt as she was already living in my home as she was always sleeping over! But I did not realized that the friend also had a clutter management problem!

Her stay has been quite disruptive on my household even though my daughter denies it.Â  When one does something the other one will followâ€¦Â  No matter what I do or say, they will not listenâ€¦ and if I dare say to my daughter her friend is not welcome into our home anymore, she will just attack meâ€¦Â  And all I am asking is little things likeâ€¦GOING TO SCHOOL for one and organize everything in their bedroom, maybe go to a clutter management class or even Google it to get some tips on closet organization or something!Â  Learn how to declutter so that it would not be such a dram to clean up a bedroom!

I donâ€™t think this was too much to askâ€¦ and before we moved to this house, the friend was sleeping in the guest room so instead of one messy room there were 2 messy bedroomsâ€¦

One day a girlfriend of mine dropped by and I showed her the state of the room which was actually worse than the picture shown below as this is not as bad as it usually is… and I should have taken the before & after shots because that day we decided to put some order in the room.Â  It took us one hour and halfâ€¦ When the girls came home, not only I did not get a â€œthanks for cleaning the roomâ€ or something along that line but it was trashed within 30 minutes!

And the friend has not come home!Â  She was out all night.Â  We tried to call her, send her textâ€¦ nothingâ€¦ and the friend has one of thoseÂ  hip-top mobile phones that never leaves her sightâ€¦ But she has been found.Â  I donâ€™t know her story yet but it better be good oneâ€¦Â  One thing for sure is that she was not taking clutter management classes! 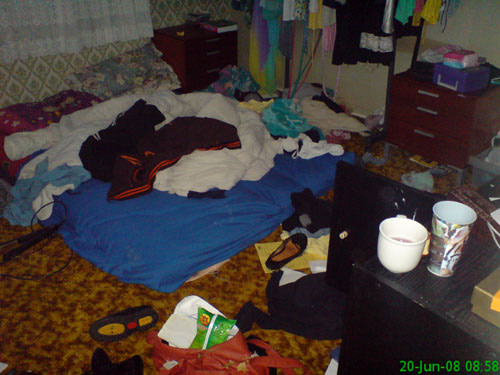