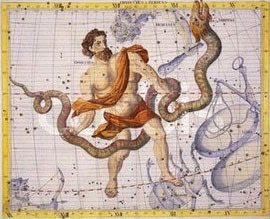 If you are like me, and enjoy reading about astrology (at least just for fun), you’d probably know by now that astrologists are talking everywhere about a new zodiac sign called Ophiuchus. What’s the story behind these rumors? Is there actually a 13th sign? If so, when does Ophiuchus’ influence takes place? What are the natives of this new zodiac sign like?

Let me begin by telling you I don’t follow astrology religiously. However, I find it quite amusing, and I do read about it from time to time. I have also bought a few books about my sign and astrology in general. Personally, I am Taurus. I’m known for my determination, since I tend to follow my goals to the end, and I’m also proud to be stubborn like not other, hahaha!

The news became public recently, when astronomer Parke Kunkle told NCB news that many people today are not born in the sign they are supposed to be. This is due to the fact that, in the last 3000 years, the Earth’s alignment has changed. For example, someone born on June 12th, according to the old horoscope would be a Gemini, but with the change of dates, he or she would become a Taurus.

Besides, astronomers claim there is a 13th Zodiac sign, falling between Scorpio and Sagittarius, which they call Ophiuchus. So the “big news” isn’t new at all, because these changes didn’t happen day over night. As Kunkle says: “This has gone on for thousands of years. (…) The Sun is in a different constellation than it was 3,000 years ago”.

The constellation of Ophiuchus has been depicted as a man carrying a serpent. In fact, the name Ophiuchus is Greek for “serpent-bearer”, although there is no certainty of which specific character from mythology is Ophiuchus supposed to represent. It might be Laocoon, a Trojan priest who was killed by sea serpents, or Asclepius the healer, or Phorbas, saving the people of Rhodes from the rage of the snakes…

This new Zodiac sign is found in the Sidereal Zodiac, used by Hindu astrologers, but not in the Zodiac Western astrology uses. Therefore, even when the dates have technically changed, this won’t have an influence in regular astrology. Horoscope readings will not be affected. However, out of curiosity, these are the dates that currently reflect the alignment of the Earth, Sun, and stars:

By the way, Ben Stiller, Britney Spears and Jeff Bridges would be Ophiuchus, again, if the new zodiac sign was taken into account by astrology… Nevertheless, it’s fun to know about this new zodiac sign, Ophiuchus!