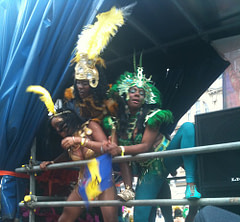 Beware, the above video about the Notting Hill Carnival is very boring…

My friends keep asking me if I have written about the Notting Hill Carnival.

-No, I did not write about it because I am not sure what to say about it, or what I have to say is actually no good at all. Alright, so I took a few pictures, and I managed to do a video, but then I realized how boring the video actually was – even when I had tried so hard to remove the most boring parts!

The Notting Hill Carnival or the London Trash carnival? What was it all about exactly?

Sunday was the “children” day and Monday was the “adult” day… OK… so we decided to go on Monday. But on Sunday I was having a coffee with my friend Leila on Queensway, and we were watching those people walking around like Zombies. They did not look like they were having fun; they were just walking around, blowing their whistle from time to time. Exciting, isn’t it? (Please note the sarcasm, oh, please, DO notice it…) The amount of rubbish that was along Queensway was unbelievable. I have never seen Queensway so dirty even when we had the London Riots.

And no, we did not notice anyone walking around with great costumes that would let us know there is indeed a carnival going on….

So let’s see, what is a carnival exactly? Because I might have my vocabulary mixed up or something, since English is not my first language. Webster dictionary defines ‘carnival’ as: 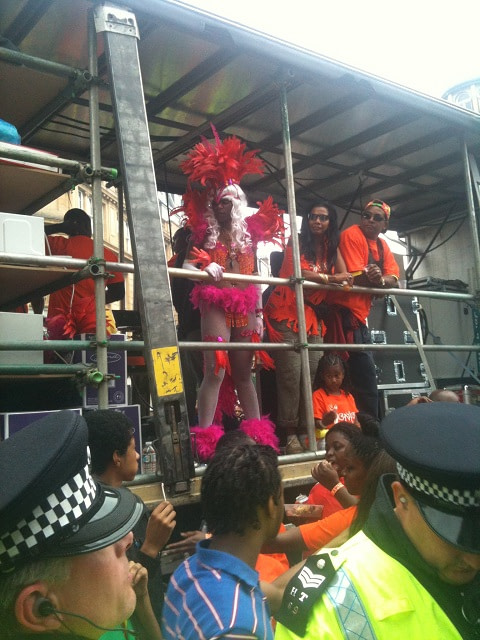 The Notting Hill Carnival or the London Trash carnival?

While the ‘a’ is the religious meaning, all of them express amusement, merrymaking, fun, fun, fun! I was expecting loads of people in magnificent costumes, loads of food stall all around the streets… instead all I could see was fat women and children walking around showing off their unbelievable fat bellies and big asses! Walking around, eating food, and looking so bored! I can understand people being tired after walking round and round the streets for two days, but if you are tired and hungry, please go, and sit down, and relax. What kind of messages were those people sending?

A friend of mine -male- said to me: “You should have gone on Sunday, they were all teenagers!” Did he mean they were less fat people parading around on that day because they were teenagers? Because from what I could see, the age did not matter, most young and old people were fat all the same.

Don’t take this the wrong way! I have nothing against fat people. But this is a carnival, and it is supposed to be beautiful and fun, and having some curves should not affect being beautiful, but in that case, there was nothing gracious about it.

When I first wrote about the Notting Hill carnival, I looked for a nice picture –a beautiful woman in a beautiful costume- on Flickr, and now I understand why there were not many results. I was reading an old newspaper just a few days ago, and there was a two-page article about the Notting Hill Carnival with only two pictures on it, one of a female in a costume and one of a male in a costume.

The music was crappy in my opinion. Each truck had their own singer/DJ but most of what I could hear sounded more like a cacophony…

Anyway, the Notting Hill Carnival was nothing but a huge disappointment, so there’s really ‘Notting’ left for me to say.