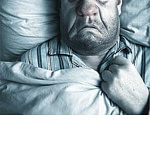 You have no doubt been in a situation, as a woman, where you have an ill man in your hands. Nothing major, just a cold or flu or bad tummy. Itâ€™s amazing how these are treated as life threatening illnesses. If you want him to get better, my advice to you is to let him go through the entire cycle of whimpering, whining and groaning. Once he is done, he will be better, will get out of bed and life will be normal once again.

You have seen the annual flu. None of us goes for long without contracting one. You get home and he is sitting in front of the fire. He has a blanket clutched tightly to him. He has a box of Kleenex and maybe some brandy, but definitely a whole bottle of flu medicine next to him. His eyes are red and rimmed and when he talks, he croaks. You smile and gently ask whatâ€™s wrong. He may be in so much pain that he will just point to where it hurts â€“ if you have a baby you are familiar with this. Or maybe the real pain is yet to set in and he can spare a word, one word. He says: flu. It comes out all shrunk and miserable. You can see it running in his mind, were flus put on this earth to destroy him entirely?

You canâ€™t understand the constant glugging at the bottle of brandy and the flu medicine and you suggest that maybe heâ€™s had enough and he should lie down. You are now in control, and he will not argue. Over to the couch he drags himself and his blanket. He doesnâ€™t carry with him the Kleenex, after all he has only 2 hands. As soon as you arrange the cushions for him to rest his head, he points at the Kleenex. You will be at this pointing thing for a while, so sharpen your senses now. If he is feeling entirely depressed, he is going to point to the bottle of brandy from within the blanketâ€™s folds. Just give it to him. Itâ€™s the flu, and he will not die from being drunk with the flu. He will actually get out of your way.

You go off to make him some soup â€“ you have to show that you really care because thatâ€™s the only way we are going to get out of this in under a week. When you get back with the soup, he is snoring and slobbering all over your new cushions â€“ the trail of saliva goes back all the way from the cushion to his mouth, and there is a nice wet patch there to tell you that you might be getting a new cushion again very soon. So much for the soup, he is asleep.

If itâ€™s a stomach upset, itâ€™s an entirely different matter, especially if it involves a boyfriend or a husband. He will get home and crash through the door and rush to the bathroom. It takes him 15 minutes to come out, and you can see he is in a sweat. You know whatâ€™s going on, because itâ€™s likely that you can smell it. Did I hear the loo flush? How do you expect me to remember to flush the loo at a time like this? Have you got no heart? You go in there and head turned, you do it. You come back and ask him whatâ€™s going on. Something he ate at lunch, he canâ€™t figure what.

The goings and comings from the loo might increase to any degree at this point â€“ be ready for that, but a stern look from you will usually get him to flush after himself henceforth.

God forbid that itâ€™s a stomach problem of the gas kind. If itâ€™s a man that you share a bed with, this piece of advice will help you get some rest. When you get to bed, get him to sleep near the window. It may take some convincing, but he should lie with his behind facing the window. If you donâ€™t leave the window open, you have wasted all that time and effort. The window must be open and hopefully, the gods are good enough to send in a breeze every once in a while to stir things up a bit. If all this works, he will be de-pressurized in the morning, happy and you should insist that he doesnâ€™t eat at that place again.

Whatever you do, throughout the entire shenanigans of the flu, diarrhea or gas, show that you care. They get better faster and you can go back to your life.