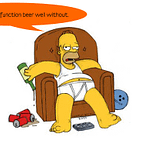 As a woman who wants to successfully relate with a man, whether your husband, boyfriend, brother, cousin, dad or even room-mate, you must know the no-go zones of males to make any success of the relationship.Â  There are some boundaries you donâ€™t cross with men, and knowing these boundaries will go a big way in holding the peace:

Whatever you do, his TV habits are out of bounds for you. If he wants to stare at the Sports Channel like a complete idiot all day and half the evening, please refrain from asking if he is completely well. In fact, refrain from making even the mildest comment, or even requesting for the remote so that you can check the weather channel before you can leave the house in case you get snowed in.

2. If you leave him alone with a child(ren), never ask him what they ate while you were gone.

You will immediately be lied to, largely because it was either only sugar loaded cereal or a double burger and fries. In fact, you might immediately plunge them into feelings of low self-confidence and shame. He will start to question whether he is really up to the job of watching the kids for 3 hours while youâ€™re out, and tomorrow, they might not feed the poor kid at all. You are better off secretly asking the child â€“ you can offer an equivalent if not bigger bribe.

In fact, Iâ€™m even reluctant to discuss it here. It can be a subject of much contention and word exchange. You will occasionally come across a pair of underwear that has some interesting marks on it. They are usually highly suspicious looking streaks in the butt area. Whatever you do, DO NOT ask. The first thing he will ask is if you think he wasnâ€™t properly toilet trained. There is no way you can answer that question without deeply hurting his feelings. Remember always that hurt feelings in any man will come back to bite you sometime â€“ after all, youâ€™re a woman.

4. How you look in that dress

Even your father will lie to you about that one, largely to protect himself and not you as they are so keen to make us believe. If you look fat and he says so, he is asking for trouble. You look very nice is a lie, and he is similarly asking for trouble. Get into what you think you look best in, and leave the man out of it â€“ itâ€™s between you and your mirror. Remember, most men canâ€™t help telling you if you look smashing.

Whatever your suspicions and whatever your evidence, if it doesnâ€™t directly affect you, keep your mouth shut. If it does, you are faced with a mountainous job of collecting real hard facts that need to be presented either to a psychiatrist or a lawyer. If you ask him directly if he is gambling, of course he is going to say no, whether he is or not. Whatâ€™s the point?

No, of course not. Thatâ€™s another question that will never really attract a true answer, so there is no point in asking it anyway. Let it be; he will sleep it off and you can have a go at him in the morning about what he did while he was under. And mark you, he will still maintain that he was not drunk.

7. Were you just looking at her?

Men have homing devices that seek out great looking butt and hot jugs. He has to look. Itâ€™s subconscious. Please understand that as a woman. He HAS TO LOOK. Itâ€™s wired into the genes. He is genetically predisposed to look. And he is also afraid that you will catch him looking and get mad. Think about how much effort he has put into taking a sneak peek. Respect him for that effort. Donâ€™t harass him for looking. Remember again that this is another question that always gets â€œnoâ€ for an answer. It doesnâ€™t matter if itâ€™s your brother â€“ they all deny it.

There are many, many more. The whole point is to make sure that you know the no-go zones of any male that you have a relationship with, no matter the nature of the relationship. You will avoid much contention.