Some time ago, I wrote what turned out to be quite a popular post. It was a compilation of funny relationship quotes, often referring about marriage in a chauvinistic or feminist way. Personalities such as Socrates or Groucho Marx have discussed marriage from a funny –yet often quite cruel- point of view. But the four or five famous phrases I got were just the tip of the iceberg! I recall many people –friends of mine for the most- sending me other quotes and asking me about my thoughts on them. So to you all here is a sequel of marriage & relationship quotes. Enjoy!

This little quote says a lot about what men expect from women in different moments of married life: make love to them while still young and gorgeous, listen to them and enjoy conversations in a mature age, take care of them when they are old. It also implies that men usually live fewer years than women. But who said mature women don’t enjoy sex, or that younger women don’t need to be taken care of?

“A man doesn’t know what happiness is until he’s married. By then it’s too late.” (FRANK SINATRA)

Happiness is linked to unlimited freedom, doing whatever you want, arriving late at night (if you wish to come home at all…). Marriage certainly puts an end to all that. However, we could consider marriage as a different kind of happiness: being in a committed relationship, having someone to go out with every time you feel like it, or someone waiting for you 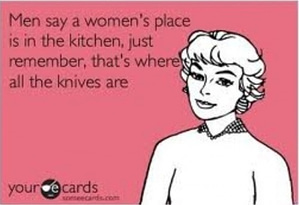 to come home… well, at least I can imagine it, Sinatra obviously couldn’t!

“Sometimes I wonder if men and women really suit each other. Perhaps they should live next door and just visit now and then.” (KATHERINE HEPBURN)

“All marriages are happy. It’s the living together afterward that causes all the trouble.” (RAYMOND HULL)

I put these two quotes together because both of them represent the idea that living under the same roof is what kills love, not the fact of being married. And I must say, some part of me agrees on it! I believe having a steady relationship is more likely if both of you have your own space, and are not forced to waking up together every single morning. Could single bedrooms, or at least, single beds, provide this independence? Flexibility, when it comes to marriage, might be an answer we are overlooking!

“A good marriage would be between a blind wife and a deaf husband.” (MICHEL DE MONTAIGNE)

The French essayist states a recurrent stereotype: women complain way too much, men should better not listen to them. And men do so many things wrong, women should better look away. Some marriages are built on this foundation, though I seriously doubt they are truly good marriages, as the quote says. I think us women should learn to be kinder, and men should be honest. From my point of view, a dishonest marriage is nothing more than a scam. What are they trying to prove to the rest of the world anyway?

“Why does a woman work ten years to change a man’s habits and then complain that he’s not the man she married?” (BARBRA STREISAND)

Good for Barbra! This is the first quote I found in which a woman actually assumes her fault in some flaws of marriage. Most women struggle to change their men. But this is not the man’s fault. You can’t blame him if, after being pushed, blamed, criticized, analyzed and transformed by no other than yourself, he doesn’t resemble what he used to be. If you love a man, love him the way he is! If you want to change him, then don’t marry him.

“An archaeologist is the best husband a woman can have. The older she gets, the more interested he is in her.” (AGATHA CHRISTIE)

This writer actually married an archaeologist, so I guess the quote is meant as a joke. However, it states some truth: men always want their women to look perfect, young and beautiful. It is something biological in it, because men are looking for someone who can reproduce and carry their genes or something, I don’t know. Sometimes, as they grow old, they feel compelled to change them for someone younger… But all of us grow old, so do men. If we want to stay happily married, we need to look into the other person’s inner beauty, and find that spark that never fades.

“Only choose in marriage a man whom you would choose as a friend if he were a woman.” (JOSEPH JOUBERT)

I have many boys who are my friends –and not my boyfriends! But there was a time in which friendship between a man and a woman was something unreal. I guess this quote was written back then. Anyway, I think it is really true: any two people who want to be in a happy couple need to be friends. Close friends. Sharing the bedroom doesn’t give you as much intimacy as sharing a piece of your soul with the other person. If you can’t befriend someone, don’t marry them in the first place.

“The secret of a happy marriage remains a secret.” (HENNY YOUNGMAN)

All people are different. Hence, there are not two marriages in the world that are exactly alike. No one, not even the happiest couple in the world, can give you a perfect recipe on how to live happily ever after. If there is such a recipe, it works for them and for them alone. In fact, most happily married people don’t believe there is such thing as a secret behind their happiness. Happiness cannot be explained! I guess that’s because if you are happy, you don’t stop to think how come it is possible, you just are. And enjoy it! The same happens with marriage.