Onward, How Starbucks Fought for Its Life without Losing Its Soul Review

On another post, I’ve told you about how much I enjoy spending some time in a Starbucks near by, with a cup of hot vanilla coffee (I’m no fan of Starbucks Frappuccino, remember?), enjoying the peaceful atmosphere and the delicious smells surrounding. Well, because I was never a big fan of Starbucks until I arrived in London –as there are only a few Starbucks on the Sunshine Coast-, I had never heard of Howard Schulz, the President and Chairman of Starbucks. Schultz is indeed the man responsible for Starbucks the way we know it. The other day, while I was waiting for my coffee I saw his latest book for sale, and I bought it.

The book’s title is Onward: How Starbucks Fought for Its Life without Losing Its Soul. It was after reading it that I decided to do some research about the history of Starbucks…. This title has just been published, but it isn’t the first book that Schultz writes. Back in 1997, he wrote Pour Your Heart Into It: How Starbucks Built a Company One Cup at a Time (which I haven’t read since it is supposed to be sold out and out of print). This first book, according to reviews, is the story of the founding and ideals of the company that made coffee-to-go a worldwide accepted tendency.

Onward would be, in that sense, the “sequel” of such a story. In this brand new book, Schultz explains (from his very personal point of view) the challenges he had to face when trying to save an already mature and known company from losing its way. In fact, Starbucks had begun as a place where people could buy coffee beans and equipment. It was under Schultz’s management that it became the huge fast food chain present in 50 countries all over the world. And in its 40 years of history, Starbucks has survived more than one economic crisis. 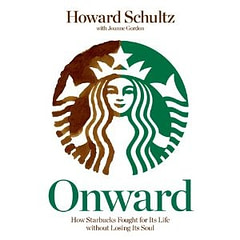 Schultz shares the decisions he had to take during the transformation of the company, some of them weren’t easy. However, his leadership has helped Starbucks remain profitable even in the hardest times, when other companies collapsed. Onward presents real problems that the company had to face, and the complicated solutions that they implemented in order to remain what they were known to be: a company that puts customers first and that has quality as the top value. The book is also loaded with anecdotes, providing an unexpectedly warm look at the big corporation –which will remain warm and human in the reader’s eyes thanks to this touching and inspiring testimony.

This book is, at least for what I believe, the true testimony of a person who is proud of the company he has managed to create. Despite the criticism that Starbucks, as any other big company, may receive, there are many of us in all the world that identify ourselves as loyal customers. Starbucks certainly reflects Schultz’s leadership philosophy: winning is great, but you can’t win at any cost.
Buy Onward: How Starbucks Fought for Its Life without Losing Its Soul