Sir, can you help me? I’m homeless 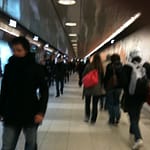 Maybe when Phil Collins sang Another Day for You and Me in Paradise, he had just taken a walk down the Paris Gare de Lyon. Paris is a city of contrasts, and thinking about it takes my mind back to The Hunchback of Notre Dame. Even back then, Paris was filled with people who really did not have a place to call home, who were at the same time surrounded by all the creature comforts and glamor that Paris offers those who have money. The Hunchback, simply because he was different, was cast out, treated like a demon and the only person who could take him in was a man of God. He lived a haunted life, hidden from the world, molested each time he stepped out. Thank God for Happily Ever After endings. Today, that story’s ending would probably have been very different.

You would like to imagine that hundreds of years later, with so much apparent sensitivity for those around us who have less, Paris is different. Not much. I see it all the time: homeless people, out in the freezing cold, begging for scraps to eat, for a Euro or two so that they can get board for the night, out of the cold. Cats and dogs get to sleep by the fire inside apartments, but the homeless man or woman downstairs have to wrap themselves in lots of plastic sheeting to keep off the next attack of pneumonia.

The other day, as I was connecting trains to get to work at Paris Gare de Lyon, I came across a crowd of people around some yellow police tape. At first, I thought it was a crime scene, but as I got closer, I could see a dead body on the ground. Going around the crowd so that I could get a better look, I realized that he was a homeless person  probably dead from cold or hunger. The police were busy trying to keep the crowd at bay, and that’s what seemed most ridiculous to me. On a normal day, this dead man encountered those same people hundreds of times, very likely asked them for a scrap or a coin, but they made it wide around him, to avoid looking into his eyes, because it would remind them of what they have and don’t share, and their conscience would be uncushioned from its warm and pampered comfort zone.

But now that he was dead and we all wanted to take a peek. Is it fascination with death? I don’t know, but I know that when he was alive, he longed for contact, for help, for someone to look at him as a fellow person and understand his special circumstances.

We are usually very quick to judge; it must be drugs, it must be alcohol there’s always a justifications for letting a fellow human being lie out in the cold at night while you throw off your extra comforter because it’s too warm. What is it that makes you throw away that extra sandwich just because you are on a diet and can’t eat more than the $200 diet program recommended? Is it inherently human not to think that the next person could benefit from what you have? That you could change their day, their outlook on life, just by giving them something so small and insignificant to you that you’d never miss it? What makes us want to have too much when the next person dies from having nothing?

The Paris Gare de Lyon is full of homeless people, men and women. There’s an old lady there who tries to earn a buck through singing she doesn’t have the gift of it though, and however hard she tries, it will be the occasional averted eye that will drop a dime in her bowl. My guess is she has children to support but no way of doing it and she has to go out on the street. She’s done her homework well, she chooses the high traffic areas, but all the same, the high traffic will usually act as if she is not there, or as if she is a pestilence to be crushed. Why? Do your honest math: if you took a Euro or 2 or 10 out and gave it to her, or stretched out a hand and shared your sandwich, or had a hot meal packed for her as you ate your lunch, would your estate crumble, would your fortunes dwindle? No? I thought so. But think about how much you can change her life. 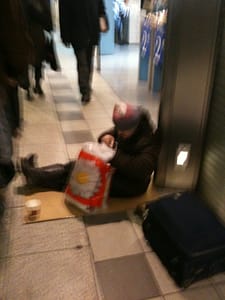 Next to her sits a man in a tattered coat. He has to hunch himself together to keep out the cold. I find myself thinking about his feet, how cold are they if he has had to sit out here since sun-up and its snowing outside? How many old, warm coats that you can’t even recall sit in your closet? How about wrapping one up and giving it to him before you board your train?

There are some of us though, who know that we are all connected as human beings; that you are me and I am you; any time, things could change so that I am the one struggling to catch your eye as you hurry down the street, you trying not to catch mine.

There’s a coffee shop next to my office and the girl behind the cash machine is one of those souls â€“ she knows that we are one, and she goes out of her way to make, the other person, poor or rich, an extension of herself. The other day, when I popped in for a coffee, an old homeless woman came in and said to the girl that she was hungry from the way they talked, you could tell they knew each other from before. One of the customers was about to hand her some money, but before she could, the girl behind the cash machine said it was better to give her food. The homeless woman was quick however; she grabbed the money and ran off. She probably has a habit to support, but whichever way you look at it, it’s her fault and we’re all responsible too.

If the government got all these people with drug habits on some kind of healing programs, they might not eliminate all of them but they would reduce them. One thing they say about addicts is that they are always looking for a way to quit. But think about it; you have kids at home who are hungry, you are hungry and cold yourself, not a dime in your pocket, you’re alone, everyone ignores you, aren’t the chances rather high that you’ll reach for a fix? What will you do with the little cash you get just for an escape for a few moments?

Stop once in a while and give a smile with a homeless person notice how they lighten up. And as you get to know them better, ask them how they got to live in the street in the first place. For most of them, it was life that led them there; it was their only hope of survival. And the street is full of evil when they got there, someone was waiting with a fix. Ask them and they’ll tell you, their first fix was probably free. They loved the high so much because it let them go away for a moment. And from then on, they were hooked.

Life is hard. You can’t help everyone. You can’t fix everyone’s problems. But when you can, reach out a hand and give a coat, a hot meal, a pair of warm sock or shoes. Give them a smile, say hello. Remember, we all live in one cosmos, we are all one. You cannot be wholly happy if a part of you is unhappy or in pain try to heal it.