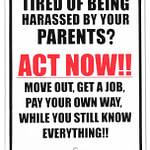 Do I hear Aye, Aye from the entire planet’s mass of persecuted parents? Why do teenagers have to be such a pain to live with in the first place? They are by far harder than your spouse, than your nosy neighbor and than your slave-driving boss.

You see, it’s paradoxical. When the proverbial stork initially delivers these creatures, otherwise fondly referred to as babies, they come with some level of management, but painful as it can be sometimes, it’s usually within your abilities if you stretch yourself.

They generally turn into toddlers, and then pre-schoolers. At this point, you have to manage just a couple of things: compulsive question asking and looking like they are going to run smack into the wall. When they actually do join a real school, it’s almost too much for any parent really if you see any tears, they are of joy, because the buggers are finally out of your hair. Be warned though: there is a very tough obstacle course here called Pencil Management. At this age, children’s pencils develop the magical ability to levitate and leave through the window without your poor child noticing. Perhaps about 10 million pencils will get you through this period.

Bang! Teenage! You know you’re there when the pencils lose their ability to levitate and get mysteriously lost. And also because the teenager in question will not bother to tell you anything about anything, be it a floating pencil or a knife in their ribs. Your best bet for information, if you didn’t bother to add a snooping brother or sister (who, by the way, will be like this at one point), is your detective skills. This is something that should be incorporated into every Lamaze class how to snoop and detect after your baby-turned-teenager.

Oh, you’re home?  Mhmm
How was school?  Ok
Did your pencil float off? Didn’t see. (they never see anything  this is a standard response you’ll be hearing for years to come).
Your brain perhaps? Didn’t see. Oh my, there we go.
Do you have leprosy? Don’t know.

And after worryingly stuffing themselves with sugar and grease at the kitchen table, teenagers will generally leave the room in a close-to-violent stance. The violence is given away by the bang of their bedroom door.

Of course, minutes or even hours later you may be standing there wondering why teenagers just can’t leave the house by the front door, and also why they didn’t put off that blaring music.

Wise parents do not arm their teenagers with communication gadgets expecting that it’s them who will be communicated with  Ohhhh noooo. Those are given away strictly to hold the peace; never expect to be called. That’s what teenagers call talking to grown-ups: it cannot, under any circumstances happen. Should they do it, it’s a court-martial and a dishonorable discharge from teenage-hood.

If you want to be a successful parent of a teenager, here’s my advice: lower your expectations to the bare minimum, including knowing that brains can levitate and fly off, and that you can have a leper in the house and not know about it. You will get through just fine. Worry about drugs, but this is the kind of thing you can only appeal to higher forces about. Guns and knives also fall in this category. And so does pregnancy.

Follow that rule, and teenagers will love through 7 of their most turbulent years  remember at the end of the day, they are still just what the stork delivered.