Tigers: Can We Save Them Before It’s Too Late? 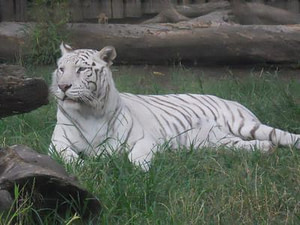 Today I feel like writing about tigers, since they are one of my favorite animals. I was just checking the news on the sunshine coast, I guess I miss home sometimes, and I ran into this story about an Australian zoo and its amazing conservation movement at The Tiger Temple. And since I love cats, as I already told you in this post, I thought it was an interesting story and I decided to share it with you.

It makes me sad to think that such a beautiful species is facing extinction because of the terrible things we human beings are doing to the natural environment. There are only 3500 tigers left in the world, and if we keep killing them, or ruining their habitat, they could all be dead by the year 2020. But we also need to look at the half full glass: there are many people who care about animals and who are doing lots of efforts to save endangered species. This is the case of the Australia Zoo Tiger Temple and the Wildlife Warriors.

The Australia Zoo on the Sunshine Coast is acknowledged as one of the main contributors in helping to save the tigers. Eight years ago, the Tiger Temple enclosure was opened, and since then, the Zoo has raised over a million for tiger conservation. Giles Clark, Zoo heads of tigers, has been working with these amazing animals ever since he was 14 years old. “For me, it is not just about saving the tiger but the millions and millions of other species that share their habitat, including us humans, who rely on the resources that their habitat provides”, he says. They have ten tigers which are part of the internationally accepted program. Eight keepers spend up to six hours a day engaged in the care of the animals, doing all their best to provide them the best possible life quality. Hopefully, the tigers will breed in captivity, making their part to the survival of their species.

Some facts about tigers

I wanted to know more about tigers, the biggest cats in the world, so I decided to do a little research on fun facts about tigers. For example, there is a common representation of the tiger as a dangerous, man-eating animal. You can imagine why, especially when you learn that a tiger can eat up to 100 pounds of meat in just one night! That means about 400 hamburgers! But man is rarely their main course: they eat monkeys, deers, porcupines, and even small animals like frogs or tortoises. The roar of the tiger is amazing and breathtaking: you can hear it over a mile away! I guess this way you can easily avoid becoming part of the 100 pounds of meat of their dinner. LOL 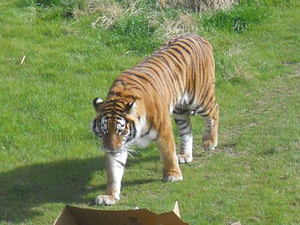 There are five different kinds -or subspecies- of tiger alive in the world today. Three tiger subspecies, the Bali, Javan, and Caspian tigers have become extinct in the past 70 years. The current surviving tigers are called Siberian, South China, Indochinese, Bengal, and Sumatran. These species differ in size: while Siberian tigers are the heaviest subspecies at 500 or more pounds, with males heavier than females, the lightest subspecies is the Sumatran; males weigh about 250 pounds and females around 200 pounds. The heaviest tiger recorded in the Guinness Book of World Records is a 1,025-pound male Siberian tiger.

Do you remember Rocky III’s theme song? It was called ‘Eye of the tiger’, right! Tigers have round pupils and yellow irises (except for white tigers, that have blue eyes). Because of their retinal adaptation that reflects light back, the night vision of these cats is six times better than ours. They also see in color.

While a tiger in the wild usually lives for about ten years, tigers kept in captivity (in good conditions, of course, as in Australia Zoo Tiger Temple) can live twice as long.

And what about their stripes? They are as unique as human fingerprints; no two tigers have the exact same pattern of stripes. While there is not a universally accepted theory on why tigers are striped, scientists think that the stripes work as camouflage, helping tigers hide from their prey. The Sumatran tiger has the most stripes of all the tiger subspecies, and the Siberian tiger has the fewest stripes. What do you think about tigers?