When Unlimited Is Limited by @O2 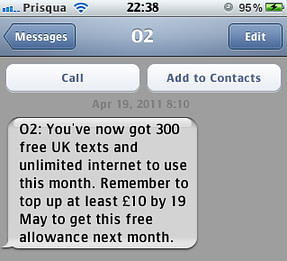 If I were to say to you, I just found the secret to “Unlimited” wealth, what would you think? Unlimited sure sounds good! No end in sight, right? More money than you can count. Unlimited means no limit or restriction in terms of a number. It’s a pretty simple word actually, nothing fancy, no hidden meanings, Right? WRONG!

I arrived in the UK a few months ago. The very first thing on my agenda was to setup my iPhone with a local carrier and having an iPhone makes the whole thing a bit more complicated.

I use my iPhone mostly for communicating through the internet. I rarely use the actual “Phone” part of it. I don’t really text either. I mostly use my iPhone for data services. I can keep in touch with my friends and family this way through emails, Instant messaging and Facebook so I need the best data plan that money can buy. Back home, In Australia, I believe we have the best deals on mobile phone service. I have yet to find a better deal overseas.

When I was in the USA, I had to use AT&T. It was expensive. In order to get a data package, I had to pay for a call plan too. The price just kept getting bigger and bigger. I had no interest in calling or texting but in order to get at least 1gb of data transfer, I had to buy this expensive call plan. It was overpriced, especially considering that I would never even use the calling service and rarely use the text service .

Back in the UK, I went into a Tesco shop – where they seriously need to learn about customer service, but that’s another story… It was the only shop that was close and it appeared to have the best deal with o2 , so I went for it!

For 10 pounds I could call. I was not sure about the charges and restrictions. I also got 300 free texts. These were useless to me but I got 500mb of data transfer. It was better than nothing I suppose.

Once everything was setup, I was ready to start using my new service. I turned my phone on and received a text message. It was a message from the service provider. Part of the message said, “You’ve now got 300 free UK texts and unlimited internet to use this month…” Whoa! Wait a minute. Did that just say what I thought it did? I looked back at my phone and there it was, written in black and white. “Unlimited Internet.” I was so excited. I spend a lot of time online playing games, checking my emails and chatting with friends and family, checking in to Foursquare just in case you have not noticed…

So unlimited internet was exactly what I needed and I was more than happy to have it. I thought it was some kind of bonus for joining o2 for the first time. The text said “unlimited internet” so I didn’t even bother to look online. There was no fine print. There was no asterisk next to the word unlimited. As far as I am concerned the sky is the limit, so I used the internet freely and I did not monitor my usage at all.

A few days later, I got another text. This one said, “I had used 450mb of my allotted 500mb.” I was confused. The other text said I had unlimited internet and now this one said I had almost reached my limit, but unlimited means no limit.

It was time to call customer support and figure out what was going on with my so called “unlimited internet.”

To make matters worse, customer support is not free! That is just wrong. If I want any kind of help with 02, I have to pay more money.

Here is a copy of my phone call to o2 customer support.

o2 Customer Service Rep: “The rules are clearly explained on our website. You should have checked this before using our service.”

o2 Customer Service Rep: “Unlimited internet is based on the average usage of our customers, who rarely if ever use more than 500mb of data transfer.”

Me: “So you are telling me that unlimited internet is limited? Because logically, if an internet plan is capped, it cannot be unlimited!”

I am not your average user and was he serious when he said that most users don’t even use 500mb in one month? I find that hard to believe. I can go through 500mb of data transfer in a matter of days if I am not very careful and if no access to WIFI. I received a text message that said I had “unlimited internet.” The last time I checked, unlimited really meant that there were no limits, but apparently this is not the case with o2 and probably other mobile phone providers.

But don’t take my word for it and Google it…

I got a message from a friend just the other day. It made me laugh. Larry said he thought of me while doing the crossword puzzle in The New York Times, Sunday edition. The clue was, “Limit” and the answer was, “cap.” I think this more than proves that the words “Limit” and “Cap” are synonymous with each other. Perhaps I need to send this crossword puzzle to o2…

How would you feel if you were in my situation? Am I the only one that feels like these mobile phone companies are taking advantage of us with their so-called “unlimited” plans?