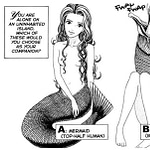 What women want: A response to the merman or inverse-merman debate!

Some time ago, I posted a picture of a cute mermaid and an inverse-mermaid (basically, a fish with legs!). I asked guys, in case they happened to be on an inhabited island, which company would they prefer. The most interesting response was Bobby’s, who asked in return:

But what if there is a MERMAN and INVERSE MERMAN and girls had to choose one of them. For curiosity purpose I would like to know what Woman have chosen?

Good question! It really made me wonder, so to answer Bobby’s comment, I started to ask some of my girlfriends what they thought (after all, I can not credit my own opinion as every women,s response, right?).

Here are a few results:

– All of them agree that, given only one companion, they would rather spend time with the merman. We all assume that he is as good looking as the mermaid, great smile, white teeth, niiiiice hair, a deep yet soft voice and good manners. Girls can easily picture themselves swimming in the sea with him, holding hands, kissing him on the sand and sharing a sunset in his arms…
– I started to think most women focus on the face of men rather than their bodies… so I asked them which specific male part do they look at first. Their responses were the following:

Guess what, Mr Merman has it all!!! I do not know if they are just shy, the thing is non of my friends mentioned the guy’s thing, at least never in the first place! We care about smiles, looks, kisses, embraces…

– A couple of my friends complained about not being able to share long walks in the beach with the merman. I can not say I was not a little surprised to hear this: walking seems to be more important than love making!
– Not to mention talking! Us women are more talkative than guys, I think. Some of my friends said something like I’d rather never have sex again than being unable to talk to another person). Well, the merman is not exactly a person, but at least we can assume he would be able to speak! (Wonder what language do mermen speak, though… the good thing is he is not likely to be obsessed with sports! Waterpolo, perhaps?).
– Every girl I asked said that the mere idea of being loved by a fish with legs, no matter the size of his manhood, was simply disgusting! Nobody seemed to care about the fact that the merman lacked certain basic attributes (after all, he has a mouth, he has a tongue, he has hands, enough to satisfy most women, right? Hey, you regular guys could learn some pretty nice tricks from the merman, now that I think about it!).

Basically, for us women there did not seem to be much of a debate. I guess we are not as obsessed with sex as many guys are… at least not to the point of considering sleeping with a legged fish! 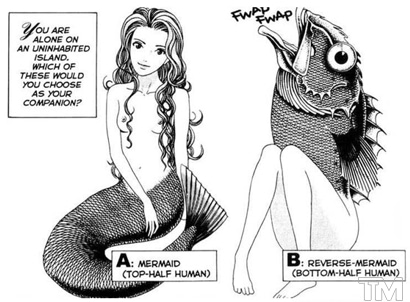